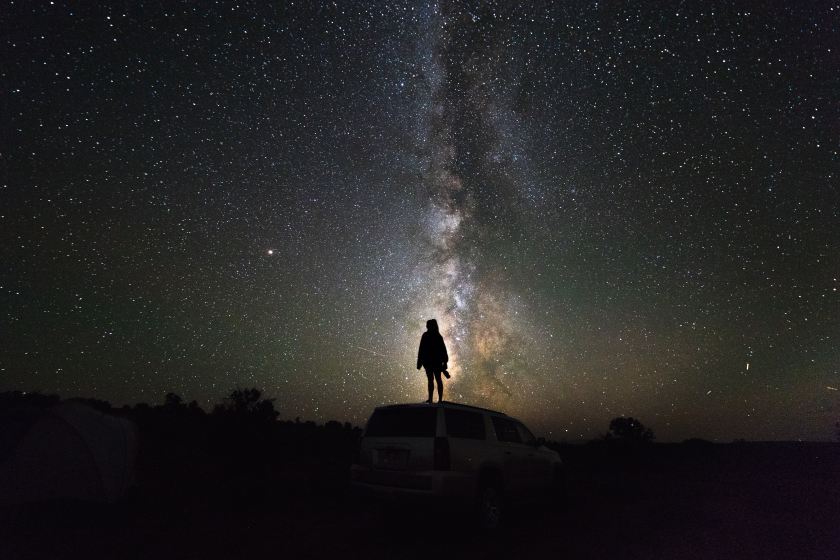 If a person is lucky, she receives a gift that is not only creative and thoughtful, but is life-altering. You know the kind I mean: the book that stops you in your tracks and changes your worldview, the pair of socks that causes you to rethink your relationship to footwear, the mug that brings a smile to your face every morning. Even the simplest of presents can make big adjustments to the way we live our lives. Those are the best kind of offerings.

This year, my dear husband gave me a telescope. I wanted one since I was a child, but had no plans to purchase anytime soon. I was so moved by his gesture of love, because it was based on an understanding of who I am and some of my deepest desires.

I want to see the celestial bodies. (I named my daughter Luna, for goodness sake!)

As soon as it started to sink in that this beautiful (Celestron!) telescope was really mine, I realized that this was a life-changing gift. Not just a hobby, but a door to looking at the world – the universe – differently.

This is the starting point for what I am about to tell you.

Last night I finished one of the books in the stack – H.A. Rey’s The Stars: A New Way to See Them (1952/2016) – which is a beautiful introduction to astronomy for average folk. The mere mortals who do not spend days up to their eyeballs in physics calculations can pick up texts like this one to get a sense of what we see in the heavens. Taking the time to learn about constellations and the basic nature of celestial bodies is not only a rewarding experience, enriching the moments when we glance up at the sky at night, but it allows us to step away from ourselves for a bit. This is not only enjoyable, I believe this is necessary in order to be a good human.

We are the stuff of stars, anyway. Even beyond this fact, taking a moment to look up (away from the cell phone, our fashion choices, our “very important” jobs, political ideologies, religious beliefs)  gives the funny sensation of letting go. In some ways, we are forced to do so when we realize the real position earthlings hold in the universe. Even if you believe that humans are the absolute center of everything (anthropocentrism) or are a neo-Ptolemist (earth at center of the universe,) it is still impossible to deny the bigness of it all – and that we are so very, very small.

It is sublime, in the truest sense of the word.

At this point, it is pretty incomprehensible. These numbers become nearly meaningless to us, except in symbolic form – as numbers. Rey helps us by putting things in “human scale,” using human objects to attempt some understanding. He uses this illustration: if we shrink earth’s orbit to the size of a dime, our close star neighbor (in our galaxy) Sirius would be a grain of sand, three miles away. On this same scale, the stars in our galaxy would be like one grain of sand in every cubic mile.⁠1 The sky can seem jam-packed with stars, but there is a lot of so-called empty space out there. However, when we consider the sheer number of galaxies that exist, it becomes clear that though the distances are vast beyond comprehension, they are not few.

Those galaxies do not come in skimpy numbers, either: the Hubble space telescope in orbit around the earth shows us that in a patch of sky that is black to the naked eye, within an area smaller than the size of the head of a pin held at arm’s length, there are more than 10,000 galaxies. There are hundreds of billions of galaxies in the universe, each containing billions of suns; some of them accompanied by smaller galaxies as though by satellites, forming clusters; clusters separated from each other by millions of light-years of space empty beyond imagination. If you stop to think it through it may well take your breath away.⁠2

Throughout my education, I studied and wrote about the concept of the sublime, but never have I come across the actual feeling with such intensity as when I think about the universe. I attempted to express these feelings to my husband, but in the sublime’s true form, no words seemed sufficient. They still do not. I began to feel like nothing mattered – but that sounds too nihilistic. Everything we do and strive for here on earth just seems so insignificant compared to what is Out There.

I do not feel defeated, though. I feel connected. What I can “see” makes me feel small – because I am! We are so small and we get sucked into tiny narratives, letting them overcome our emotions and mental space. Does any of that matter? Sure it does – to an extent. We live in this world and our activities affect others. Certainly, the stories we live matter. But when was the last time we looked up and out of our lives? The answer to looking “up” is usually expressed in religious terms. My answer is, in a way, no different. However, the human imagination needs to release itself from the shackles of traditional religion. The religion answer is too small.

Simply by looking up and out, we recognize the bigness of everything around us. It is enough to take us away from ourselves for a moment and question our purpose. By questioning, then, we can get to a place outside of the religious prison we made for ourselves and consider the “everything else” that exists. This can lead to a radical act of belief in a God that lives beyond a human structure of religious organization.

We can also get a sense of our simultaneous importance and unimportance. Humans hold both positions, equally. The majesty of the universe inspires us to care for our planet and each other with more consideration and love. Understanding the humble position of humanity allows us to ease up on the pride and selfishness we cling to so strongly.

Not everyone needs to take up astronomy as a hobby and procure a big fancy telescope, but taking time to look up – even to get a sense of what the moon looks like, locating the Big Dipper (it leads you to the North Star!), and the colors in the sky – will take you away from the “me” narrative we get locked into. Without warning, it will free you.