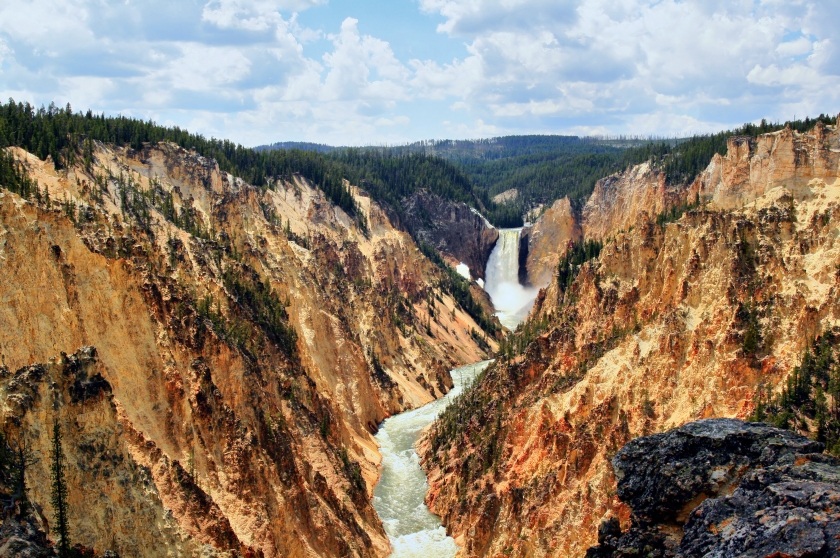 William Henry Jackson is one of the best-known photographers of the nineteenth-century, publishing images of the Yellowstone wilderness as a member of the government-sponsored Hayden Survey before it was a national park and documenting the White City during the 1893 World’s Columbian Exposition for tourists and posterity. He became a legendary figure in the narrative of National Park history, and living to almost one hundred years, served as a link between the twentieth-century obsession with the west and the myth of the frontier.

Through the antebellum era there was a widespread assumption that the West was uninhabitable for “civilized men.”[1] It was too desert-like to be worthwhile. Eventually, this belief gave way to a large-scale welcoming of frontier expansion by the general population for Euro-American settlers as a result of conclusions derived under the directorship of Ferdinand V. Hayden (1829-1887) during the U.S. Geological and Geographical Survey of the Territories. These surveys helped to “[destroy] the myth of the desert and legislat[e] the myth of the garden in its stead.”[2] Hayden approached Jackson in the spring of 1870 to become the official photographer for a large information-gathering survey that would cover parts of Colorado and Utah, which would cover the full Wyoming Territory.[3] Interest in the natural landscape transformed from the Emersonian pastoral ideal to an organized documentation and cataloging of the sublime.

Jackson’s role as photographer of these areas positions him at the center of technology, wilderness, and masculinity. Early outdoor photography operated as a contrasting practice to nineteenth century feminine sentimentalism, exemplified by Douglas through the iconic Little Eva of Stowe’s Uncle Tom’s Cabin: the embodiment of worshipful religious piety and wisdom, sweetness, and was generously maternal.[4] Additionally, Americanist Lois Banner defines the physical characteristics of the ideal woman under the image of “the Steel Engraved Lady.” Found in antebellum fashion magazines and widely seen lithographs, she is definitively passive. It was not the expected character of the ideal woman to lug heavy equipment over the bounds of the earth. Though women did participate in the photographic process and certainly contributed to the cultural works of the century that incorporated themes of nature through writing or painting, the arduous task of towing hundreds of pounds of gear and dangerous materials outdoors during government surveys or professional exploratory excursions was bestowed upon male photographers. In his autobiography, Jackson remembers, “Going at it in the open meant labor, patience, and the moral stamina – or, perhaps, sheer phlegmatism – to keep on day after day, in spite of the overexposed and underdeveloped negatives, and without regard to the accidents to cameras and chemicals.”[5] Living the frontier life was also a marker of masculinity. Since women were expected to be the moral center of the home, and ultimately one of the pillars of a republican nation,[6] there was little room for them on the edge of society.[7] Jackson, like many of his male peers, “seemed the perfect marginal man for the marginality of this actual frontier.”[8]

From the beginning, people assumed that there was an inherent truthfulness to the camera lens. Instead of having a creative mediator, such as the painter with canvas and brush in hand, a camera “captures” and “abolishes the narrow entrance ways of painting though which only certain prestructured faces, scenes, arrangements, and scales of space can enter and present themselves to be seen.”[9] As the industrial age moved along, new ways of seeing shattered the old and created new expectations. Landscape art of the early nineteenth century was thoroughly immersed in sentimentalism through the pastoral and the sublime. Works by American landscape painters Frederic Church (1826-1900) and Albert Bierstadt (1830-1902) were meant to move the viewer to great emotion and enthrallment. While both artists worked alongside the developing field of photography, the reason for modern technology’s existence was drastically different. Importantly, “the work of early landscape photographers was personal work, or work intended for a rather small audience of dedicated amateurs and educated professionals, and it was devoted to structuring landscapes in familiar terms.”[10] Or, in Jackson’s case, for the use of the United States government. Though he found it immensely important to capture a pleasing image,[11] the photographs were meant for dual audiences: the federal government and for whomever Jackson wished to view them afterwards.

This dichotomy is seen between the images made by Jackson and the landscape artist also hired by the survey, Thomas Moran (1837-1926). They worked closely together during the weeks in Yellowstone, Jackson writing “Moran became greatly interested in photography, and it was my good fortune to have him at my side during all that season to help me solve many problems of composition. While learning a little from me, he was constantly putting in far more than he took out.”[12] Both the photographer and the painter created images of what Jackson called “the climax of the expedition:” the Yellowstone Falls and Grand Canyon. They are, however, significantly different types of images. It was Jackson’s primary task to document the area for congress, posterity, and on a secondary level, for the possible purchase of prints by patrons.

If taxpayers and Congressmen alike wanted more evidence, none of them wanted it half so much as Dr. Hayden. He had a double motive. The abstract scientist in him wanted more facts to work with, while the practical planner in the man at once saw how a widespread public interest could keep his Survey alive permanently. Hayden knew Congress would keep on with its annual appropriations exactly as long as the people were ready to foot the bill, and he was determined to make them keep on wanting to.

That was where I came in. No photographs had as yet been published, and Dr. Hayden was determined that the first ones should be good. A series of fine pictures would not only supplement his final report but tell the story to thousands who might never read it. Photo-engraving and ten-cent picture magazines were still unknown; but an astonishing number of people bought finished photographs to hang on their walls, or to view though stereoscopes.[13]

Even if average Americans wanted to purchase images of the Yellowstone exploration, it would be less for the artistic merit (though certainly evident) and more for the documentation the event and location. Jackson created thousands of photographs during his time with the survey, but the photographs of the Grand Canyon are certainly breathtaking. One in particular, titled “Grand Canyon of the Yellowstone, From the East Bank” (1872) relies on the optics of texture to provide depth of perception. The Yellowstone River weaves its way through the center of the picture plane, cutting between rock and cliff, framed by forests of pine. The horizon is high in the background, with a pale sky looming above. Close to the viewer are ancient pines and as they recede toward the Lower Falls, one gets a sense of the steep degree of the sharp descent below. Faint lines interlace over the rock walls around the falls and large faces of earth, rock, and trees protrude over the threadlike river. The photograph is indeed magnificent because the scenery is magnificent. After years of the public laughing at messengers who describe the wonders of Yellowstone, a photograph will help them believe.

The expectations for Moran’s paintings were slightly different, based upon sentiment of feeling and reality. The challenge that the painter could conquer that Jackson could not is the replication of color along the ravine. Yellowstone’s Grand Canyon has unique hues from mineral stains of hot springs and steam vents and, in his later years, Jackson remembers the painting’s “accuracy.” “So far as I am concerned, the great picture of the 1871 expedition was no photograph, but a painting by Moran of Yellowstone Falls. It captured, more than any other painting I know, the color and the atmosphere of spectacular nature.”[14]

This requires us to ask what a “real” picture of nature might contain. Is it the topography, as seen in Jackson’s photograph – though, only partially because he did not have access to color imaging – or is it the creation of “atmosphere of spectacular nature?” A similar painting by Moran titled The Grand Canyon of the Yellowstone (1872) provides an almost equal perspective to that of Jackson’s photograph. The landscape is an immense 84 x 144 1/4 in. and like other nineteenth century works of the same genre, allows the viewer to “step into” the scene. Moran’s perspective is comparable to Jackson’s, but more painterly qualities are employed. As mentioned, the rich use of color is stunning and he shows the gradients of pale yellow to deep sienna along the walls of the canyon. At the center of the picture plane in the distance is a perfect view of the Upper Falls, consumed by sublime visuals. Instead of a pale sky in stark contrast to the texture of the land, Moran reworks the scene with deep gray sky and an abundant mist floating from the falls to the heavens. 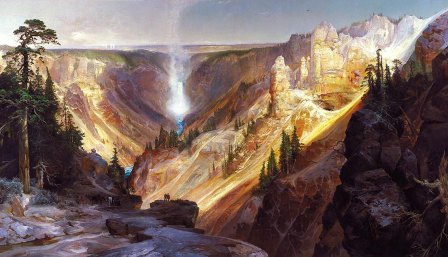 The Yellowstone River weaves brightly in blue between craggy walls of yellow and brown. Rich green pines are artistically placed in contrast to the rock and earth, less uniform but with more sentiment of feeling. Moran even provides rugged trees reminiscent of Thomas Cole’s (1801-1848) signature dramatic foliage in the foreground to frame the image, but only a few and on the left side of the picture. Balance is the enemy of sublimity. Finally, four individuals and two horses are added at the edge of the cliff at the bottom of the landscape, for both scale and to draw the viewer in to a more contemplative engagement with the scene. Consider the men taking in the vast expanse of the Yellowstone – Moran insists that you should do the same.

One can gain a greater understanding of Moran’s goals through his correspondence with Hayden after the expedition. In the spring of 1872, he wrote the geologist about the work in progress.

I have been intending to write to you for some months past but I have been so very busy with Yellowstone drawings, and absorbed in designing and painting my picture of the Great Canõn that I could not find the time to write to anybody. The picture is now more than half finished and I feel confident that it will produce a most decided sensation in Art Circles. By all Artists, it has heretofore been deemed next to impossible to make good pictures of strange and wonderful scenes in nature; and that the most that could be done with such material was to give topographical or Geological characteristics. But I have always held that the Grandest, most beautiful, or wonderful in nature, would, in capable hands, make the grandest, most beautiful, or wonderful pictures; and that the business of a great painter, would be the representation of great scenes in nature. All the above characteristics attach to the Yellowstone region, and if I fail to prove this, I fail to prove myself worthy the name of Painter.[15]

Of great concern is the potential “sensation” the painting could provoke in the viewer. As Moran realizes this potential for nature paintings, he desires to prompt the feelings one would have when looking at a grand landscape in person.

American culture is deeply rooted in visual imagery and so it is imperative that we understand the purposes of the different structures of production. Particularly, in an era where we can access digitally enhanced or traditional images through smartphones and computer screens, art galleries and theatre stages, understanding the meanings of platforms will serve us well.

[7] William Henry Jackson writes extensively in his autobiography about whole communities of Mormon believers moving to the frontier. Women and children were certainly a part of this experience. Additionally, it cannot be assumed that there were no women on the frontier, but the point here is that the ideal of the Steel Engraved Lady resisted the necessary skills that one needed to live in such a community.