Something interesting happened this weekend. I watched landscapes transform in front of my eyes. I witnessed trees alter their purpose to enfold new meanings.

I visited Longwood Gardens’ Nightscape, an artistically-driven exhibit that interlaces light and color with the foliage after dark.

During the show (which in July begins at 9:30 P.M., August at 9:00 P.M. and September at 8:30 P.M.), the visitor can start at one of four sites on the grounds: the large lake on the east end, the flower garden walk, the topiaries in the center, or the conservatory on the west side of the park. In total, there are nine separate viewing locations. Longwood Gardens is located in Kennett Square, Pennsylvania, a short drive from Philadelphia.

After a long, partially sunny/somewhat drizzly day of trekking through meadows, exploring coniferous groves, and peering into the faces of blossoms, we relaxed a bit at the outdoor beer garden, specifically established for the run of the exhibit. Cold drinks in hand and bluegrass in the air, we were excited and impatient as we prepared our eyes for the nocturnal landscape.

As time drew closer to 9:30, we traveled to the west end lake to ensure a first-rate viewing spot before the show. Through the day we observed technical gear through the park, and though we did not have a map to guide us, we identified the prime sites: the lake, the topiaries, and the conservatory. There are many pathways in the park, but by this point it was clear that the main route was through the Flower Garden Walk. Lit with tiny LED lights, the dark flowerbeds intermittently pulsed and rippled with color around us.

When I was a child I was fascinated by anything that told the story of an enchanted garden: Alice in Wonderland, The Secret of NIMH (1982), The Secret Garden (novel and 1993 film), and even today I am obsessed with the underlying magic and things unseen in nature. Nightscape launches the visitor into a world like this. Peculiar lighting emerges from the foliage on the ground and makes the world feel comfortably intimate beneath the trees. Once positioned near the lake we set our eyes on the ancient vegetation of Peirce’s Woods that lined the water and trickles of light appeared like paint on a canvas…

This is where I will end my description of the exhibit because I hope to inspire you to attend at some point this summer. It is well worth the trip.

From here I wish to think about the reasons for and the results of utilizing a garden – a particular, constructed landscape made of natural elements – as a canvas or platform for entertainment. 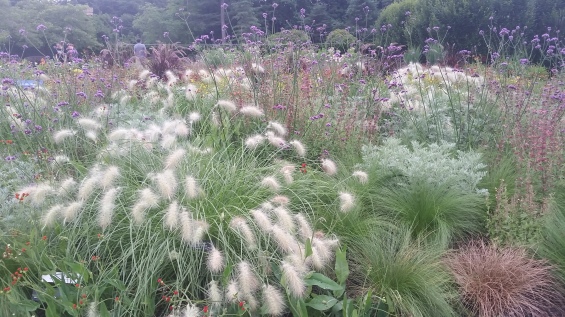 We established in previous posts that a landscape is a culturally constructed idea, whether it is a wilderness or a city park. Nineteenth-century landscape designer Frederick Law Olmsted had a particular vision for New York City’s Central Park and Boston’s Emerald Necklace: to create spaces that would both uplift the spirits and form well-developed, “civilized Americans” during a time of increased immigration to the two major cities. The parks served a purpose beyond leisure. They were tools for civic development. Somehow we started to believe that “nature” could mysteriously alter the human mindset and enhance one’s character.

Though, this was not always the case. Puritan settlers were terrified of the wilderness because of early European beliefs about humanity’s sinful nature – darkness/wilderness/uncontrollable nature was a frightening territory where evil existed. The Age of Reason, or the European Enlightenment of the 1600’s and 1700’s, changed – obliterated, actually – the way descendants of European tradition look at the world. Through the creation of scientific rationalization, they began to understand bits and pieces about nature and humanity that altered the way we comprehend spirituality and religion. Confusing aspects of the wilderness started coming into focus. Early Christian mystics [like, really early – 600’s through 1500’s] envisioned a spiritual realm that permeated all parts, seen and unseen, of our world. Good and evil surrounded us. We just could not perceive it. Enlightenment thinking drastically changed this worldview, forming a concept of duality, or dichotomy, stressing two separate parts that are in opposition and in contrast to one another. This is a gross simplification of Enlightenment theology, and I am certainly not qualified to provide a thorough overview, but the most important aspect that must be understood here is the dichotomy between the beautiful and the sublime, as proposed by English philosopher Edmund Burke in the mid-1700’s.

Burke wrote about a bunch of different things: politics, religion, and aesthetics. His understanding of aesthetics – or how we perceive/study the appearances of things – was deeply rooted in Enlightenment dual thinking. He proposed in “A Philosophical Enquiry into the Origin of Our Ideas of the Sublime and Beautiful” of 1757 that there were two [yes, dual] ways of looking at the world:

1. Seeing things as Beautiful: for pleasure or for the benefit of procreation. In other words, anything that is soft, round, and pleasing like a woman’s body [his exact words] expresses beauty.
2. Seeing things as Sublime: for protection or for the benefit of saving one’s self. But at the same time, this fear instigated by seeing something terrible – a vast expanse, an overwhelming sight, great repetition, depth, etc. – can provoke pleasure in the mind of the viewer.

ENTER: German philosopher Immanuel Kant in 1764, “Observations on the Feeling of the Beautiful and Sublime” in hand.

He challenges Burke’s idea of the sublime as an outside-the-body force and argues that aesthetics and perceptions originate in the human mind, thus it is what your brain distinguishes as frightening, but at remote distances, that create sublime feelings.

There were bunches of philosophers who wrote on this topic in the 1700’s – “sublime” was the buzz word of the day.

The point here is that the once frightening wilderness morphed into something aesthetically pleasing to view from afar.

…and this happens at the moment that the United States is established. Now, we cannot make a direct correlation with the formation of the USA and emerging ideas about the sublime in nature, but we do know that folks really interested in Enlightenment thinking formed the nation, including politicians, writers, artists, and readers. It was their worldview. Thus, they were “primed” for the great expanse of the New World. Americans of the European tradition saw a “wilderness,” but were no longer fearful of it (for some… of course, there are exceptions.) Many considered the landscape a place that mirrors the emerging American idea: new, full of possibilities, and kind of wild.

In fact, Americans became fascinated with early, pre-Darwin explorer-naturalists like Alexander von Humboldt, elevating him to celebrity status in the 19th century. Americans like Ralph Waldo Emerson and Henry David Thoreau melded nature with emerging theology – but on a foundation of Enlightenment thinking, even through their mysticism. How we view nature in the 21st century is undoubtedly connected to dual thinking. It is an “us versus them/it” mentality. Our separation from nature, our individuality, is what “makes us human.” [Though, delightfully, theologians and philosophers are challenging much of this mode of thinking today.]

Books such as Roderick Frasier Nash’s Wilderness and the American Mind (1967), Max Oelschlaeger’s The Idea of Wilderness (1991), and Simon Schama’s Nature and Memory (1995) all penetrate the mystery of nature within European/American culture, and springing forth from our reverence (and fear) of nature is the need for recreational spaces within it. Additionally, our need to control nature – from dam establishment for power to the science of botany – stems from this fascination. Somehow we began to think we have ownership over nature. We can change and alter the landscape to meet our human needs. We can form it, visually, to fashion innumerable aesthetic purposes in order to engage with it on many levels. No longer do we fear nature. We control it.

So what, then, do we make of Longwood Gardens and Klip Collective’s use of landscape as canvas? Visitors engage with the foliage on a different manner than they had hours before, closely peering into buds and taking in great expanses and heights of trees. Now, we look at surfaces and forms. Topiaries transform from precisely shaped bushes into three-dimensional structures on which to place digital images. The result is an uncanny, pseudo-industrial structure, pulsating to music. It no longer expresses the natural. It is no longer “nature.”

Yet, we definitely should have creative experiences like this with a natural landscape. I’m sure very few visitors would say they are “going into nature” when they visit Longwood Gardens, though, clearly aspects of the park are very, very natural. The newly opened meadow is phenomenal in its ability to separate the visitor from the highly structured English style gardens near the front of the park. I believe Longwood is doing something radical with their landscape. It is radical that they would separate the garden from restrictions of tradition to incorporate digital media to the visitor’s experience. It is radical that we can look at the forms of nature while separating it from its “natureness.” Longwood and the artists at Klip use the landscape, yes, as a canvas, but unlike canvas the images move. In reality, they use the landscape and forms of nature as a platform for information.

What kind of information?
…Ideas of mystery and magic, industrialization and the exotic, of nature and our abilities to create something new. Nightscape certainly alters the way one experiences the gardens. It takes the “nature” out. Or, rather, it challenges long-held assumptions of what “nature” is, anyway.

Here is a brief discussion with the creators of Nightscapes (via- Longwood Gardens):

Sarah Burns, Painting the Dark Side: Art and the Gothic Imagination in Nineteenth-Century America. Berkley: University of California Press, 2004.